The Harvest Moon: A New Beginning 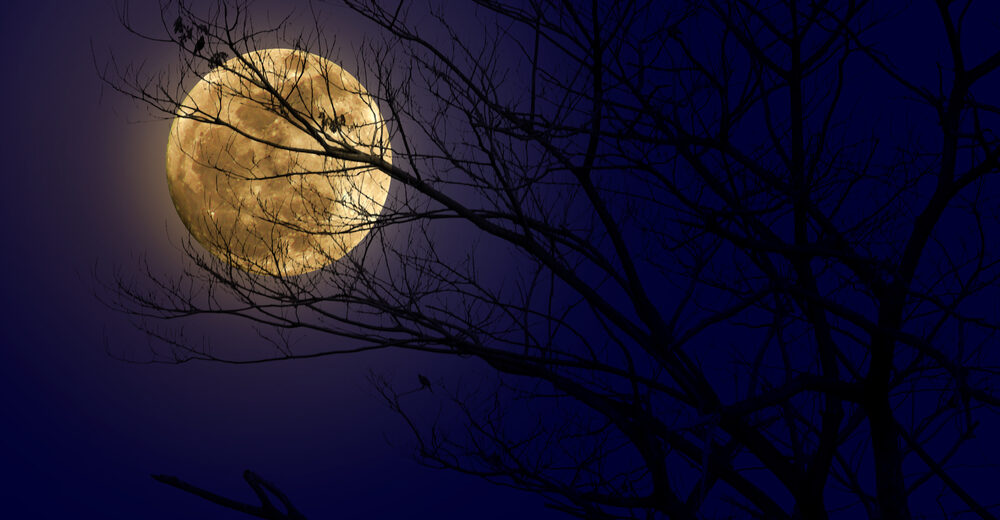 Before there were city lights to cloud our views, the night sky was awash with glimmering stars and the bright, magnificent moon. For thousands of years, people have relied on the moon for many things—to determine the weather, to understand the changing seasons, and to tell time—just to name a few. The changing phases of the moon have an impact on animal behaviors, migration patterns, sleeping patterns, and mating patterns. Everything in Nature is connected. All beings truly rely on each other for survival.

The Harvest Moon, a symbol of the seasonal transition from summer to fall, usually appears to sit low in the sky. This orange-hued moon is the full moon that falls closest to the autumnal equinox. It comes around once every year, casting a warm orange glow over the horizon. When you look toward the horizon line, you’re looking through a thicker part of Earth’s atmosphere then if you were to look up. The effect is the orange hue that can be seen on any full moon near the horizon. Similarly, our eyes play another trick on us, making a full moon that sits on the horizon look much bigger than one centered in the dark, star-filled sky.

The Harvest Moon was named by Native American farmers who would tend to their harvests later than usual under the moonlit sky. Some say it’s essential to migration patterns as many birds begin their migrations on the night of the Harvest Moon. The Harvest Moon is also symbolic of a new beginning. It marks the time when harvests would be collected and stored for winter use. After this long harvest, the fields would be ready for rest and renewal—a fresh start.

This special event happens once a year. Interestingly enough, this year’s Harvest Moon will be the second smallest moon in 2020. It’ll also take place later than usual—in October. While the full moon will be visible throughout the day on October 1, it will reach its fullest phase at 5:05pm EST. At this time, look out upon the horizon. Stand in the light of this golden-colored moon and hold The Dragon Stands Between Heaven and Earth. As you align with the energies of the Harvest Moon, restore yourself for your beautiful new beginning.

Inspired by this perspective? Read more. Find your balance and deepen your connection with yourself and Nature.