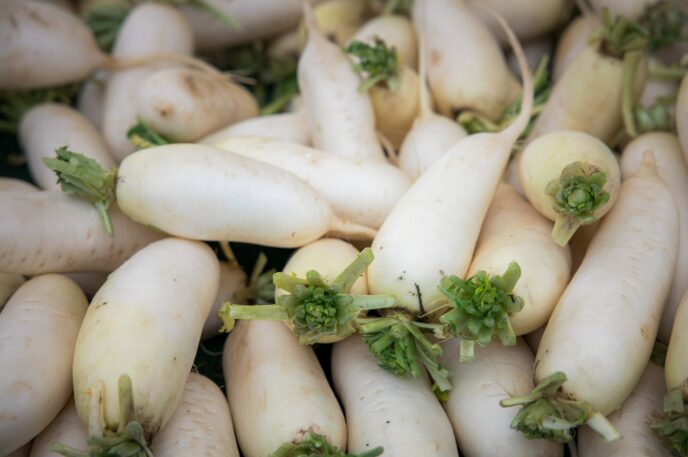 “When white radishes are in season, doctors should take a break.” – Ancient Chinese proverb

The unassuming daikon radish—along with its cousins, the black or red radish—has long been considered a superfood in many Asian cultures. This root vegetable has a unique ability to support the body as the seasons transition to cooler weather. Daikon radish is spicy and its color, white. Its healing essence matches the energies of both Late Summer and Fall, making it beneficial for both the Lung/Large Intestine and Stomach/Spleen. When eaten raw, radish cools heat in the Lung. When cooked, it supports the digestive system. Daikon radish is available in most Asian markets and some supermarkets as well. Choose one that is firm, heavy for its weight, and not too large. If you can’t find daikon, choose red radish.

In addition to its remarkable ability to rebalance the digestive system, daikon radish boosts the immune system and gently cleanses the body. These properties are famously useful for addressing side effects of chemotherapy or radiation cancer treatment.

Daikon radish is prescribed as both a direct treatment as well as a preventative. Mucus is a common condition often treated with radish. Mucus develops in the Stomach and is stored in the Lung. If mucus cannot move, it becomes a form of inflammation. Eventually, this stagnation can turn into persistent inflammatory issues and other forms of disease, such as cancers. In healing modalities, radish is also used to strengthen the respiratory and immune systems, facilitate weight loss, improve bowel function, reduce risk of heart disease, regulate blood pressure and hormones, and strengthen bones. And as an added bonus, radish is rich in calcium.

Eating radish supports healthy Lung function, which is tied to healthy skin. In Chinese culture, radish is traditionally eaten in Fall and Winter to promote beautiful, glowing skin. Ginger is eaten in Spring to help Winter Qi flow smoothly out of the body.

Although generally found on crudite platters, radish is a versatile root vegetable. Give these recipes a try!

2 cups Daikon radish, shredded
1 cup carrots, shredded
1 egg
Salt and freshly ground pepper, to taste
1/4 – 1/2 cup sweet potato starch (or corn starch)
oil for deep frying
Mix together the radish, carrot, egg, salt and pepper. Sprinkle in the sweet potato starch, a little at time, until you can form the mixture into firm balls. Heat the oil until it sizzles when a small bit of batter is dropped in. Then gently lower the vegetable balls into the oil, one at a time. Fry until golden brown. Use a slotted spoon to remove the balls. Place them on a plate lined with paper towels. Serve warm.

One Response to Daikon Radish: A Healing Superfood