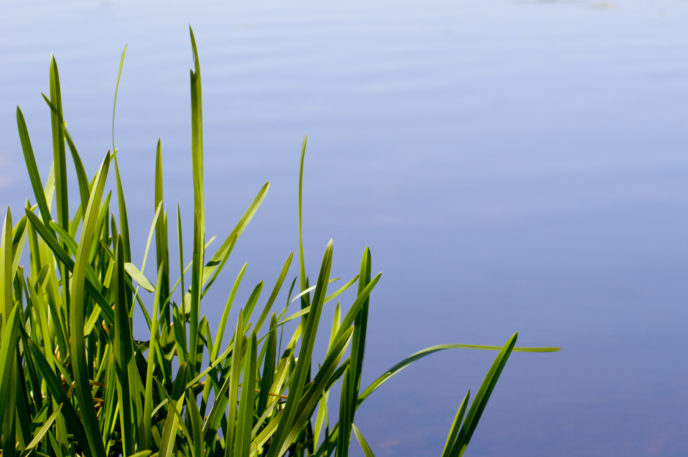 In ancient times, a mother and her son lived near the River Min. They were very poor as were many in their small village. The boy hiked out to the country to gather and cut grass every morning. He then sold his clippings to the villagers for very little money. It was barely enough for the mother and son to survive.

But one year, there was a terrible drought. The boy continued hiking to the countryside every morning, gathering whatever grass he could. As the drought continued, there was little to gather. The boy made little money and his mother soon fell ill from hunger.

The next day, the boy walked a bit further than before. Walking beside a dry stream bed, he came upon one single patch of lush, green grass. He quickly cut the grass, filled his satchel and carried it to the village. He sold the grass for more money than he had ever made before. Then he returned home and fed his mother a hearty meal.

The next day the boy returned to the same spot, hoping that luck would be on his side once again. To his surprise, the grass he had cut the day before had grown thick and green yet again. He cut every blade of grass, and returned home after earning enough money for another fine meal. The boy returned to the same patch of grass for five straight days, and rejoiced in his full belly at the end of each night.

But on the sixth day, the boy got lazy. He decided to dig the magical grass by the roots and replant it beside his house. The boy dug for hours in the blazing hot sun. He pulled away soil and roots until he came upon a beautiful white pearl. After admiring the treasure in his hand, he put the pearl in his pocket and gathered the grass in his satchel. Then he started for home.

That night, the boy showed the pearl to his mother. “Let’s sell it!” he said happily, hoping that the money they’d earn would provide food for a month or maybe more.

“No, let’s keep it for awhile,” said his mother. She put the pearl in the rice jar, which was nearly empty, and the boy went out to plant his grass.

The next morning, the boy awoke early and ran outside to check on his grass. It was withered and dying. “Oh, I am a fool,” he cried. If only I had not been so lazy.”

As he turned, he spotted the rice jar, which was now brimming with rice. The pearl sat on top of the grains, glimmering in the sunlight. He called for his mother who cried in celebration and prepared them each a big bowl of rice.

They carefully placed the pearl back in the rice jar. The next morning, to their great joy, the jar was full once more. “This is a magical pearl,” said his mother. “We must protect our treasure.” That night she put the pearl in the money box. The next morning, the box was overflowing with coins.

The mother and son had no more worries. The pearl provided everything they needed. And recognizing the beauty of their treasure and the bounty it provided, the mother and son shared its gifts with all of the people in their village.

But two men in the village demanded to know the secret to their sudden riches. “Our fortune is not a secret,” explained the kind mother. My son found a magic pearl.” As she opened her hand to show them, one man lunged forward to grab it. Sensing that the men had impure intentions, the boy reached over, picked up the pearl and stuffed it into his mouth. The greedy men shook the boy so hard to get the pearl that he swallowed it.

The boy suddenly became very thirsty. His worried mother poured him glass after glass of water until she had nothing left to give. The boy ran outside and drank all of the water left in the well. Then he drained the river.

Suddenly, a loud crack of thunder erupted as rain poured from the skies. The rains filled the river. The people were so grateful that the drought had ended that they hadn’t noticed the changes taking place in the boy.

He began to grow larger and larger, until he morphed into a beautiful dragon. As the boy-dragon walked into the river, which was now spilling over its banks, his mother cried, “Come back, child.” The dragon turned to look at her. Although she missed her child, she knew that he had been bestowed a great honor.

The boy had become the guardian of the River Min, where he still lives to this day. He is the trusted protector of the magical pearl, which gives off a glowing light and continues to increase the bounty of all it encounters.

In Chinese culture, ancient stories are filled with symbolism. Dragons are a symbol of power and strength. Round, white pearls are representative of the full moon, Nature’s most powerful monthly presence. The brave boy believed himself to be lazy when he dug up the treasured pearl. However, in doing so, he saved his mother’s life and generously supported his entire village. As the boy swallowed the pearl in a loving effort to save not only his treasure but enhance the lives of his mother and the villagers, he became a powerful protector of the whole land. His ability to open his heart fully earned him a great gift, and the highest honor.