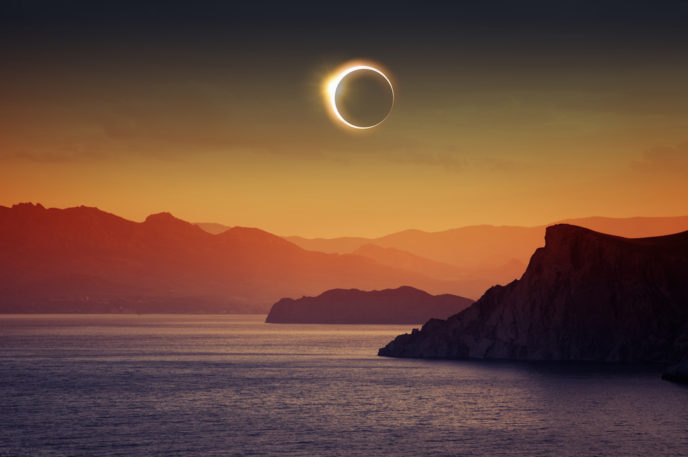 The sun and moon are two cosmic beings in the Universal picture. The sun, our greatest source of heat and light, surrounds us with its abundant energy. The moon, which has the greatest influence on the ocean tides, brightens the night sky with its heavenly glow. But this energy doesn’t just surround us, it is infused within us. It is part of the very fibers of our being. If we can connect to that energy, as we are intended to, just think of the possibilities that can unfold.

The path of the eclipse will begin in Ontario, Canada. It will then travel across northern Greenland and the North Pole, and finally northeastern Siberia. Those along this path will have the clearest view of the eclipse, which will last 1 hour and 40 minutes. People in other parts of North America will see a partial solar eclipse. The best viewing areas in the United States are the East Coast, the Upper Midwest, and northern Alaska during and shortly after sunrise. If you live in one of these regions, find a viewing spot with a clear view of the horizon, away from any light pollution. While the ring of fire solar eclipse comes once-a-year, the next total solar eclipse will be on April 8, 2024. This spectacular event will be visible in many big U.S. cities, from Texas on up to Maine.

Regardless of whether you can or cannot see the solar eclipse with your eyes, the event is still unfolding. Its energy is still very much a part of the Universal picture. The ring of fire solar eclipse is a wonderful opportunity to connect to that energy field.

In preparation for this celestial event, follow these tips: