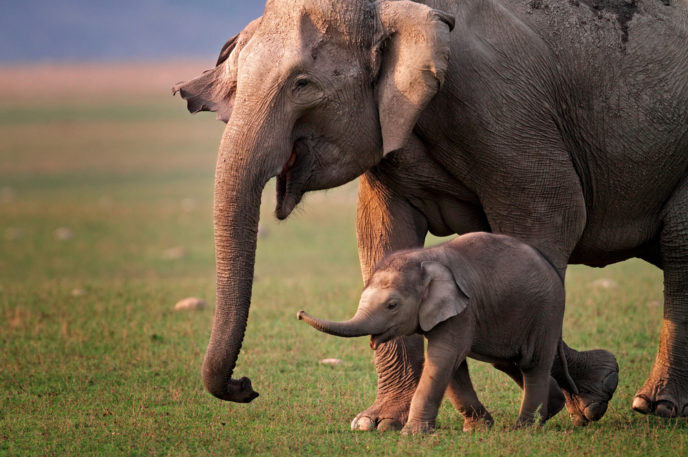 In Nature, survival of the fittest reigns supreme. It’s been that way since the beginning of time. However, sometimes, even a helpless cub left alone in the wild can find a way to survive. And usually, it’s with the helping paw of another creature.

We’ve heard stories of mother birds abandoning their young because of human interaction. Sometimes the scent of a human is enough to scare even the most nurturing parent from her babies. While there are other reasons babies are  orphaned in the wild, these creatures are often left defenseless. While some may cringe at the thought of a baby bird left alone to find food, or a fawn left to fend for itself, others may say, that’s simply how Nature works. The sight of a helpless pup may leave us to think its end is near, but thankfully, others often step in to fill the role of mom.

Many animals, such as chimpanzees, elephants, lions and wolves live in social groups, where it’s not uncommon to see an orphaned cub taken in. But other species, such as red squirrels, live in isolation. It’s very unusual for animals that are not part of a family network to take in an orphan. Still, nursing female red squirrels have been found to adopt orphaned related squirrel cubs.

Nature’s helping hand doesn’t always stay within its own species. Here are some cross-species relationships that are sure to put a smile on your face:

1. Tortoise and Hippo: Many have heard of the internet sensation Owen and Mzee. This is the story of a 130-year-old tortoise that “adopted” a baby hippo orphaned after a tsunami. The unlikely duo became the closest of friends.

2. Dog and Lamb: When an Australian black-and-white spotted lamb was orphaned by its herd for “looking different”, it was taken in by none other than a female dalmation—a true Ugly Duckling story for the ages.

3. Boar and Monkey: Miwa, a baby macaque monkey, was rescued and brought to a zoo in Japan after it was found orphaned in the wild. In an effort to soothe Miwa, a zookeeper introduced the baby monkey to Uri-bo, a wild boar that was also orphaned as a baby. Miwa jumped on Uri-bo’s back, as she would have with her mom in the wild. The two are now inseparable.

In every one of Nature’s interactions, we unfold beautiful surprises. These stories about orphaned babies and their adopted moms show the power of kindness and connectedness. Nature always provides what is needed, even if the need is love and companionship.