Wishing You a Happy and Transformative Year 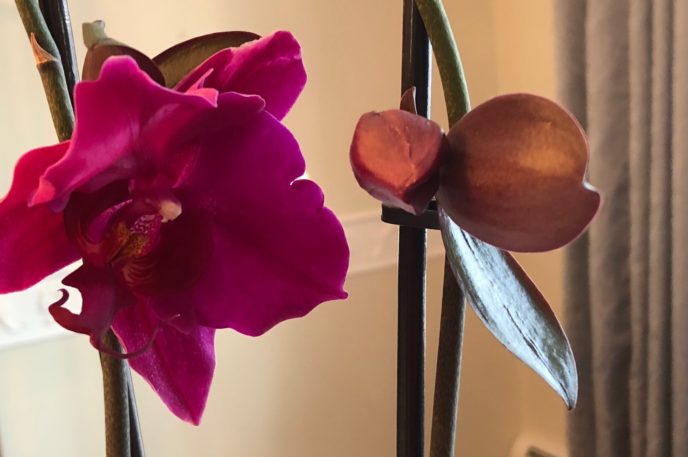 Just when you think you have life figured out, shifts happen and the unexpected presents opportunities. The unexpected can be magical—opening doors to exciting possibilities. Take this flower, for example. It’s a Phalaenopsis Orchid, which is often described as a moth in flight. When it was first purchased, the flowers were a pale purple with rounded petals. After three months, the flowers fell off, and the plant lay dormant until two new leaves appeared toward the top of the stem.

The unusual part is how and where this flower revealed itself. Normally, the orchid produces a new stem from which new blooms form. But this time, the flower bloomed near the tip of the original stem, on newly formed leaves. Its color turned a deep purple, and it formed five pointed tips. Somehow its original color and shape transformed. Could it have been from grafting? Maybe the information inherent in the plant was somehow stimulated. Or could it be that it was simply time for this lovely plant to transform and show its beauty?

Whatever the reason, it’s a sign teaching us to look within. Is it time for you to transform and show your beauty? As we look forward to a new year, we wish you the freedom to anticipate the unexpected with excitement and marvel in the transformative powers you hold within.