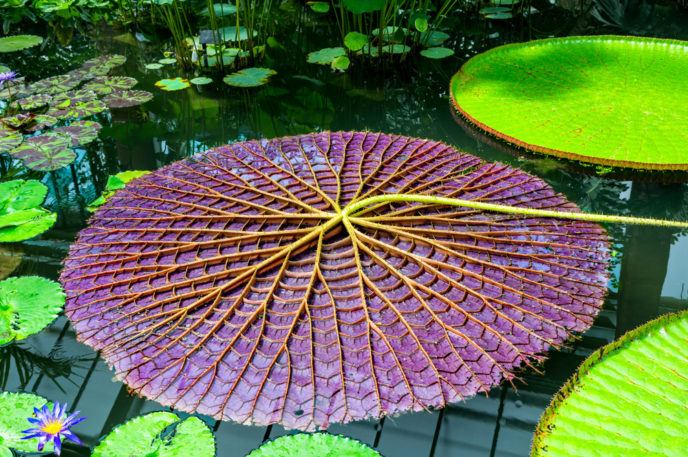 One look at Nature, and it’s clear: every being relies on another. Plants depend on soil—and the earthworms, insects and microorganisms in the soil—for nutrients and support. Other living beings—from owls to giant pandas—rely on trees for food and shelter. Nature is miraculously beautiful amidst all of its interconnections.

Giant Water Lilies are one such example of Nature’s intrinsic support network. The most impressive part of a Giant Water Lily plant is its massive circular leaves. The leaves begin their lives as folded groupings of spiny shells, which protect them from hungry fish and manatees. The leaves unfold at a rate of about 2 feet per day. Once flat, the leaves float on the surface of the water, optimizing the amount of sunlight—and therefore potential for photosynthesis. With upturned edges, the leaves provide shelter for small animals looking for a place to hunt for food, yet also block sunlight from the water below, creating a void where plants and algae cannot grow. While the leaf itself is delicate, its underside is constructed of a sturdy ribbed network with air pockets to make it buoyant yet strong enough to support up to 100 pounds.

Although these leaves are truly remarkable, the symbiotic relationship between the Giant Water Lily and the beetle is a clear example of the way Nature’s creatures depend on one another for survival. The inside of these white female flowers are significantly warmer than the air around them and send off a floral fragrance to attract their main pollinator, beetles. When a beetle lands on the flower, the lily closes around it. The beetle stays safe and warm inside the flower. The next day, the beetle emerges unharmed, and the now pollinated—male—flower has turned pink in color. On the third day, the flower sinks below the water and grows seeds that will float when mature.

As St. Francis of Assisi once said, “For it is in giving that we receive.” Humans can learn a lot about growth and happiness by observing Nature’s creatures. In giving shelter to the beetle, the Giant Water Lily is pollinated, allowing its species to continue. As such, in supporting one another, we rise higher. Let Nature be your teacher.