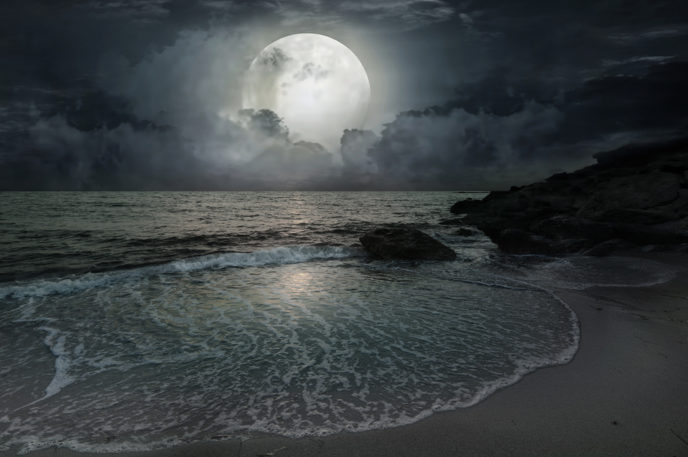 As July’s full moon approaches, we are reminded of the cultural significance of the moon. In ancient times, people gave the moon a name that represented its connection to Nature’s processes. Although these names were given hundreds of years ago, their meanings are still relevant to not only the day and the month, but to the season as a whole. Where do they show up in your culture, in your location and in Nature?

Reaching the peak of Summer, we can observe the velvety antlers of male deer that first begin to grow in early Spring. Now in the heat of July, these antlers come to a point as they harden and transform. The sight of these majestic bucks against the summer sky led to the name Full Buck Moon.
For farmers, high Summer is the time to cut and cure hay in preparation for Winter’s dormancy. This step is critical to feed livestock during the cold months that lie ahead. So July’s full moon is also known as the Full Hay Moon.
Long summer days often call on cooling rain to break the heat. Groups of people that relied on Nature understood this pattern through the power of thunderstorms. Hence, the July full moon was given the moniker the Full Thunder Moon.
There are some variations in moon names, but in general, North American tribes gave the same of similar names to July’s full moon. With a bit of influence by the Native American tribes around them and with a nod to their own customs, European settlers named the full moons as well. The July full moon takes on a different meaning south of the equator. Names that represent Summer and its patterns in the northern hemisphere are representative of Winter and its patterns in the southern hemisphere: Wolf Moon, Old Moon, and Ice Moon.

The Power of the Moon

The moon’s energetic power is at its peak during a full moon. July’s full moon will occur on Friday, July 23, 2021, at 10:36 PM EST. Although the moon will appear full from Thursday evening to the casual stargazer, use its peak time to experience the connection and wisdom of the full moon in your location.
Embrace the moon’s power and presence as you tap into this field and the consciousness of others around the world by standing in the meditative Qigong posture, The Dragon Stands Between Heaven and Earth. We will begin our meditation at 10:00 PM EST. Join us from wherever you are!

The August session of Tao of Morning Qigong will begin Saturday, August 7. Class runs four weeks and meets every Tuesday and Saturday morning at 8:00 AM EST, with a support session on Sunday evening.