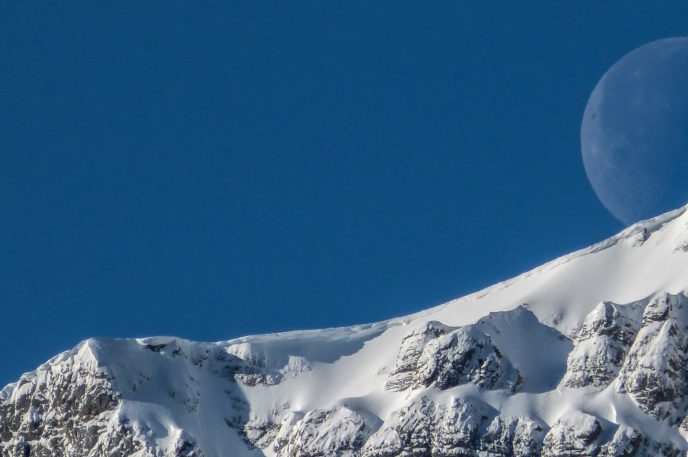 Get your snow shovels ready—February’s Full Snow Moon is on the way. It will reach peak illumination at 11:59 AM EST on Wednesday, February 16, 2022.

On average, February is the United States’ snowiest month, according to data from the National Weather Service. In the 1760s, Captain Jonathan Carver, who had visited with the Dakota, wrote that the name used for this period was the Snow Moon, “because more snow commonly falls during this month than any other in the winter.” Animals aren’t as active during this time, and abundant snow made it difficult to hunt and track, so Native Americans would also refer to this moon as the Hunger Moon. Additional names for February’s Moon have historically been connected to animals. The Cree traditionally called it the Eagle Moon, and the Ojibwe and Tlingit referred to it as the Bear Moon, referencing the time when bear cubs were born.

The moon will appear full for about three days, from midnight on Tuesday morning until midnight on Thursday evening. It will also bring other unexpected celestial gifts. On Wednesday morning, Venus and Mars will be visible on the southeastern horizon. On Wednesday evening, as twilight ends, Jupiter will be visible on the western horizon. Talk about planetary alignment!

Did you know the moon also influences the weather? Moon weather observers say the moon brings frost in the Spring and Fall and periods of extreme cold in the Winter. Researchers have shown a distinct correlation between the full moon, cloudiness, rainfall and thunder. Even weather records confirm that the first few days after a new moon or a full moon tend to be rainy or stormy. There is an abundance of moon weather folklore connecting its shape, color or position in the night sky. One indicator is  the moon’s horns. If the crescent is pointed upward, the moon is able to hold water, leading to a dry spell. If the crescent moon stands on its point, precipitation will spill out, bringing rain. What will this Full Snow Moon bring you—clear skies or snow?

Whatever the weather, everything happens for the good. Can you see the good?

Find a good spot with a clear view of the moon. As you stand in its light, practice ‘The Dragon Stands Between Heaven and Earth’ to energize yourself and connect with the moon’s power.

Click here for a video of ‘The Dragon Stands Between Heaven and Earth’.

Join these classes (and many more)!

Qi for Self Care Series, 1st and 3rd Sunday of Each Month, 7:30 PM (EST): Study with Grand Master Nan Lu as he lectures on how to practically apply the ancient wisdom of Traditional Chinese Medicine for self-care.

Dragon’s Way Qigong Instructor Training, begins March 21, 2022: As a certified instructor, you will be able to transform your own life, impact those around you, and bring this powerful system into your community. This program has the potential to help you make a living while helping others step into a whole new way of living life more fully.

Liver Qi Enhancement, March 20-30: Get your qi moving with a 10-day journey that promises to make your body and mind more playful and peaceful. Registration will open in late February.