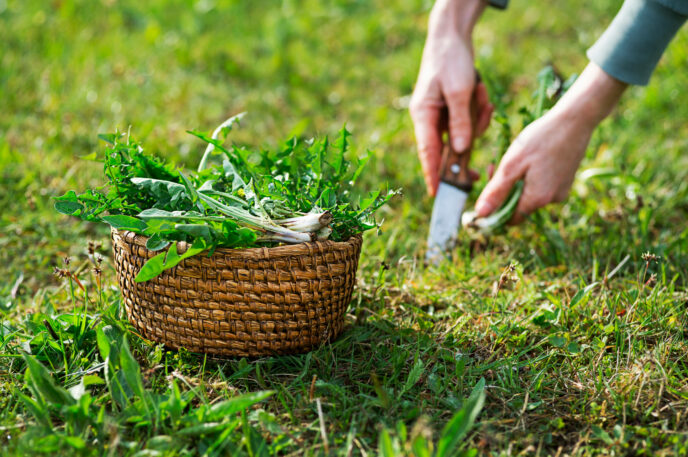 At one time, dandelion was a prized plant. Every part—leaf, root, and flower—was turned into tea and medicine to treat various ailments. In the early 20th century, many varieties of dandelion were planted in gardens, making this green an important component on dinner plates. But once nicely manicured lawns became of utmost importance, dandelion—which would easily spread if blown in the wind—was seen as more of a nuisance. So, are these bitter greens a healing helper or a wild weed?

Everything in life is perspective. How do you choose to look at dandelion? How you look is what you will see.

One angle from which to view dandelion is from the healing perspective. In both the Eastern and Western view, dandelion is a powerful healing food. Dandelion’s bitter taste can support the Heart’s function. Energetically, its essence can travel to the Liver and Stomach meridians to break up stagnation and perform incredible healing work. It can act as a natural antibiotic,  has the ability to detox the Liver, and can help with breast health issues, like cysts. Rich in calcium, dandelion is great for promoting bone health. Its sap is a great treatment for itchy skin and acne. Dandelion is also a diuretic so it’ll help you urinate, effectively helping to lower blood sugar. It helps with constipation and digestion, and removes excess sugars and free radicals in the body, so it can reduce your risk of developing cancer. A compound in dandelion, luteolin, actually poisons cancer cells, making them unable to spread. Now that’s powerful.
But this “weed” ruins the appearance of a freshly manicured lawn. And when something is a nuisance, it isn’t always viewed in a favorable light. Across the United States, people go to great lengths to remove dandelion, including applying herbicides to their lawns to eradicate the once-loved plant. However, while toxic, these treatments don’t always work. As a plant that can grow almost anywhere, dandelion even has the power to push through bricks. At the spirit level, dandelion is almost nearly indestructible.
In addition to the healing benefits of the plant itself, think about the healing messages dandelion can provide. Although it’s a “weed”, these bitter greens have great strength and adaptability. Their sheer resilience carries a message of support and endurance.
There are many ways to prepare dandelion. Looking for something savory? Saute the greens with some olive oil and garlic. Need a warming tea? Boil the greens and let stand for one hour. Discard the greens and season the tea with brown sugar and lemon. Preparing brunch? Toss some greens in with your eggs. Try some other dandelion recipes as well!
Five Elements, Food
dandelion, food, healing messages, perspective