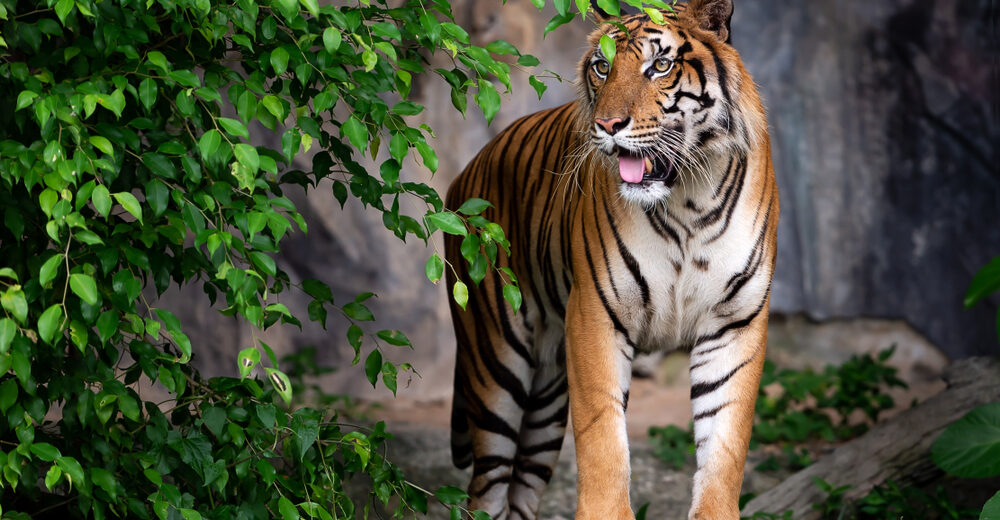 Chen Ma was an elderly widow who lived in a small mud hut in a forest in the Shanxi Province. She lived with her only son, a licensed tiger hunter, who followed in the footsteps of his father and grandfather. Whatever money he made from selling tiger skins, meat, and bones, helped him care for himself and his mother.

One very cold winter, Chen Ma’s son became separated from his group of hunters and was eaten by a hungry tigress. Chen Ma, realizing that she was alone to care for herself, pleaded with the magistrate to give her money. The magistrate promised to give her a small amount of money from each tiger that was killed by the hunters. The other hunters were not happy with this news, as they had families to feed as well.

One day, the hunters captured and killed the tigress that ate Chen Ma’s son. Instead of giving her money, they brought her the tigress’ newborn cub. Upon seeing this tiny, helpless creature, Chen Ma knew that she couldn’t bear to kill it.

The tiger cub lay at Chen Ma’s feet. She rubbed his ears and he licked her shoes. Chen Ma sighed, “They told me to kill you and use your flesh for meat. I could use your skin to make warm winter boots. I could use your bones for soup. But I cannot do that. You are so young and have so much life left in you, while I am at the end of my life.”

Chen Ma untied the rope from the cub’s neck. She had roots and grains in her shed, which she was planning to use for food throughout the winter. She made a paste from the roots and fed it to the tiger cub with her fingers. When her firewood began to run low, Chen Ma slept against the baby tiger’s soft, warm fur.

Nearby villagers did not find the tiger cub alarming, as he was smaller than a dog. But when spring came, he had grown much larger. He now had full teeth and claws. Hunters came to kill the young tiger.

Chen Ma protected her beloved tiger, saying, “I’ve lost my husband and my son. This tiger is my only companion. I shall go to the magistrate and request to adopt him as my son.”

The hunters thought the old woman had become ill. But they decided not to kill the tiger without the magistrate’s permission.

“Your request is unusual,” the magistrate said to Chen Ma. “This is a wild animal. Are you not afraid that someday it might eat you?”

“What is there to fear?” replied the old woman with tears in her eyes. “I have lived a long life. My only worry is being left alone. This young tiger has been like a son to me. Please allow me to adopt him.”

The magistrate did not have the heart to refuse an elderly woman, so he granted her wish.

The magistrate gave the tiger a large copper pendant to wear around its neck so it would be protected from hunters. The words “Fu Chee” were engraved on the pendant, meaning “Tiger Son.” Chen Ma knelt down in front of the magistrate to show her gratitude and then led Fu Chee back to their home in the forest.

By next winter, Fu Chee had grown full-size. Whenever it became playful, it would thrash against the walls of Chen Ma’s small hut. So Chen Ma reluctantly allowed Fu Chee to make his home inside a nearby cave.

The tiger came back to visit Chen Ma often, and always brought her gifts, such as a dead deer for meat or a large tree branch for firewood. It was as if her son was still alive and caring for her!

Chen Ma lived until she was 100. After her death, Fu Chee guarded her tomb every night for many years, until it suddenly disappeared.

Out of respect for Chen Ma and her tiger son, the hunters erected a stone monument at Chen Ma’s tomb with Fu Chee’s story engraved on it.

This story of Chen Ma and her adopted tiger son, Fu Chee is based on an Ancient Chinese Tale by Po Chung-ling. It reminds us that life is not always as it seems. If we allow fear to take over, we limit ourselves. A change in perspective helps us see a situation from a new angle, and can lead to so many rewards.