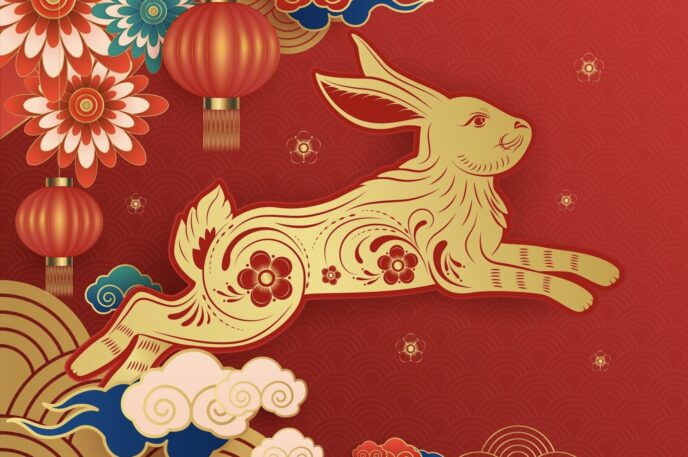 One story has it that the Supreme Being, Huangdi, decided that humans needed a compass to guide them through the invisible maze of life’s undertakings. This compass would take the form of the Chinese zodiac. In order to assign symbols to the 12 zodiac signs, he made an announcement to all the animals of the world. There would be a race! The first 12 beasts to cross the finish line would become the signs of human character and destiny.

On the eve of the race, the animals went to sleep early. Ox awoke suddenly in the middle of the night. He thought, “I am so slow. If I want any chance of being among the first 12, I’d better start now.” Ox set out as quietly as he could. As he passed by the sleeping animals, his clumsiness woke Rat and Cat, who quickly figured out Ox’s plan. Rat thought, “I am so small that no matter how hard I run, even Ox will beat me.” Cat thought, “I am a poor swimmer. I will hitch a ride on Ox’s back.” So Rat and Cat scurried up a tree and gently dropped down onto Ox’s back as he passed below. Ox was none the wiser.

At dawn, while Dragon was still sleeping soundly, every other animal awoke. They discovered that Ox, Rat and Cat were gone, so they raced after them as fast as they could. But no matter how fast these animals ran, they could not catch up. Dragon awoke without concern, confident that he had the advantage of wings, and flew toward the finish line. Although he quickly passed his competition, benevolent Dragon stopped midway to lend help to a community surrounded by fire.

Once Ox made it halfway across the river, he was comfortably ahead of every animal in the race. Knowing Cat was not a good swimmer, sneaky Rat pushed Cat into the water. When the finish line came into view, Ox paused to look back. He was pleased to see how well his plan had worked. But as he paused, Rat leapt off his back and zoomed across the finish line, winning the race. Ox followed and claimed the second-place spot.

Next to cross was powerful Tiger, followed by Rabbit, who was pushed to shore by a puff of breath from Dragon—the fifth to cross the line.

Snake, who was sneakily hiding on Horse’s back, slithered across in sixth place, just in front of Horse. Then came Ram, Monkey and Rooster, who had worked together to make their way across the rushing river.

Finally, after a bath in the river, Dog emerged and claimed the eleventh spot in the zodiac. Dog was followed by Pig, who crossed just in the nick of time, after a lavish meal and an indulgent nap.

Cat dragged himself out of the water, drippy and wet. As the 13th animal to finish the race, Cat did not win a spot in the zodiac. Cat resented Rat for his sneaky move and wanted to get even. It is said this is the reason cats continually chase rats today.

The Chinese zodiac is made up of twelve animal signs. Each lunar year is represented by a combination of an animal sign (Rat, Ox, Tiger, Rabbit, Dragon, Snake, Horse, Sheep, Monkey, Rooster, Dog and Pig) and one of the five elements in Nature (Metal, Wood, Water, Fire and Earth).

The Year of the Water Rabbit begins on Sunday, January 22, 2023. Join us every day this week to learn more about your sign and fortune in the new year.  Try some of these lucky foods this week!