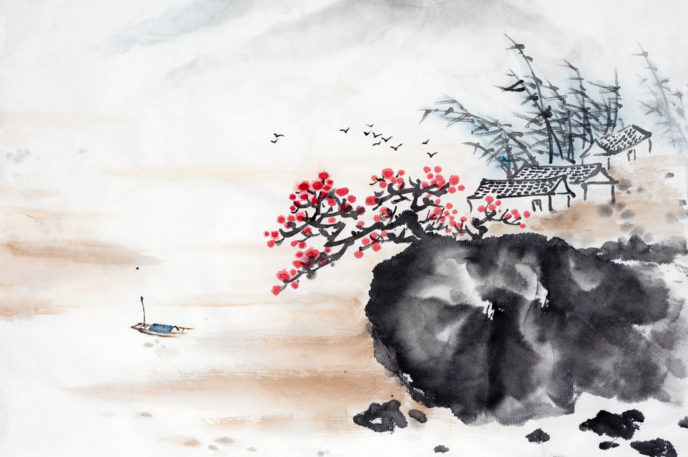 Everywhere he went, the rich man heard about a holy man who lived on top of the highest mountain in China. It was said that the holy man’s garments were spun from the finest iridescent silk, handed down from the wife of the Yellow Emperor. It was also said that his house was so grand even the trees surrounding it bowed down, and the effect of the sun reflecting brightly off its golden windows was almost too brilliant to behold.

The rich man’s garments were fit for a king. His palatial home was painted in opulent colors and filled with expensive treasures. Still, he was certain that none of his belongings were as magnificent as those of the holy man. Night after night, the rich man lay awake in his hand-carved wooden bed, feeling envious of the holy man. So one day, he decided to make the long, difficult journey to meet the holy man himself.

The rich man traveled and climbed for weeks until he stepped foot on the top of the highest peak. He knocked on the door of a humble hut perched at the tippy top. “I’ve come to see the holy man,” he said to the servant who answered. “He is here,” the man said with a smile, and he invited the rich man inside.

As they walked from the first room to the second, the rich man looked around. Instead of golden windows, he saw an open, simple wood-framed window where three yellow warblers perched, eating crumbs. He looked for the holy man, dressed in his robes of silk, but saw only the servant, with tattered sleeves and a long beard that nearly reached his waist. In a matter of minutes, the two men reached the back door and stood outside, where flowers bloomed in fragrant profusion and ancient trees swayed gently in the breeze.

The rich man exclaimed, “What kind of trick is this? Where is the holy man? I have traveled a long way and demand to see him right now!”

“You already have,” answered the holy man. “Yet you have not found what you are looking for. Learn to see with new eyes. View everyone you meet in life as a holy person, even if they appear plain and insignificant. If you do this, whatever riches you now have will be nothing compared to the treasures you will gain.”

The story of the holy man has been told and retold throughout the generations, reminding us that true riches come from deep within.