The Mystery of the Five Element Consciousness Framework 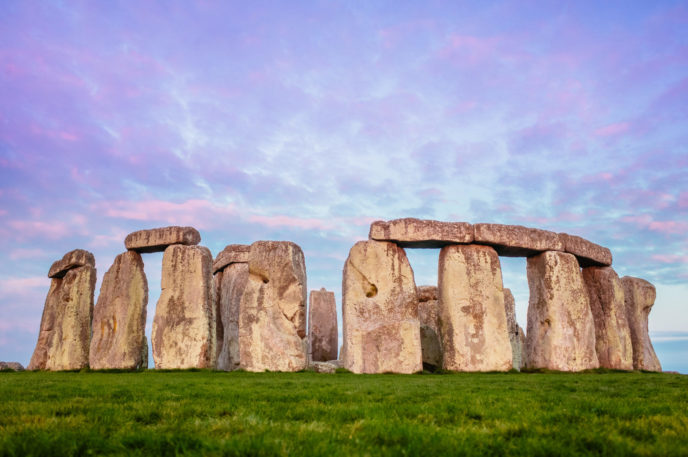 Life is a mystery. There are so many things we think we know, but do we really? For instance, many theories exist about who built Stonehenge and why, but this remains a mystery even today. The Five Element Consciousness Framework presents the same type of mystery. It gives us a unique framework, so powerful and so deep, to understand this world and everything in it. The most extraordinary aspect of the Five Element Consciousness Framework is its ability to assemble all of Nature’s elements—Wood, Fire, Earth, Metal, Water—into a single network of interrelated systems. In it, each element is a unique energy frequency, yet it operates as part of a team that functions on many levels—body, mind and spirit.

In the Five Element Consciousness Framework, everything is connected to everything else. Because everything is energy, all elements can also be read as frequencies. Therefore, they have to follow the laws of energy. Look at the Kidney; the ear is its opening to the external world. If the ear has a problem, you can’t treat it in isolation. You have to consider its many relationships. Skilled TCM practitioners don’t just look at symptoms or conditions. They must always consider relationships in order to treat the root cause of a condition. The Five Element Consciousness Framework framework lets practitioners see things happening at the body, mind and spirit level.

Once ancient masters received this intelligence about how Nature’s five elements function as one system, they gradually expanded it by assigning correspondences or categories of things that match each element’s energy frequency. Intuitively, they understood how human beings, as part of Nature’s web, also fit into this energetic framework.

At its deepest level, the Five Element Consciousness Framework is about dynamic patterns of relationships. Just like Yin-Yang, the real reason for its power is not in the categories of the visible world, but in the invisible frequencies behind them. This ancient concept has elegantly mirrored today’s quantum thinking for thousands of years. While physicists have penetrated our reality to the subatomic level and found interrelated energy patterns, ancient energy masters have done the same thing. With their discovery of the Five Element Consciousness Framework, these ancient masters penetrated the vast relationships of the energy field and discovered that Nature itself has five, interrelated energy frequencies.

Even today, we don’t know why Five Element theory exists or where it comes from. We do know ancient masters downloaded Five Element theory in its entirety from the Universal mind. Through this process, they observed each of Nature’s five elements contains its own distinct vibrational pattern or essence, as well as principle of operation. Because this theory represents Nature’s five categories, they recognized it could be applied to everything in our world, including human beings. That’s why the body’s viscera, bowels, tissues, sense organs and much more fit into these interrelated categories.

Let’s take Liver as an example. Nature’s element of Wood vibrates at the same frequency as the Liver and all its correspondences. Look at its sense organ. You’ll see the eye is the Liver’s opening to the external world; its tissue is the tendon. TCM knows any health issue with the eye, like blurry vision, or with the tendon, like carpal tunnel syndrome, is associated with a Liver function disorder. There are many relationships in the Five Element energetic framework. Over time, TCM used this knowledge to develop organ theory. Any problem with one organ will affect another one as well.

Look at the Liver’s other correspondences. Its season is Spring; its color is green. The Liver’s emotion is anger. Its taste is sour. Its direction is east and so on. All these items can also be read as vibrational patterns and energy frequencies. When you look at this framework and each organ’s correspondences, do you see something different? Can you make a connection with any condition you have?

Lucky for us, the Five Element energetic framework simplifies the vast amount of connections in the energy field by focusing on Nature’s elements. Though invisible, when Five Element theory materialized in our world, it entered this space. We know space and time cannot be separated. So, where is this phenomenon’s inseparable partner? We don’t know. It may be anchored in a time many thousands of years ahead of us or even hundreds of thousands of years in the past. We do know, though, this framework exists in our reality, so it has to follow Natural Law. Everything that exists in the third dimension, whether you can see it or not, is natural. So, our Five Element framework has to follow Nature’s laws, including that of Qi, as well as Yin-Yang, what today’s science interprets as the principle of complementarity.

TCM practitioners discovered the Five Element Consciousness Framework could be used very effectively for health and healing. In China, others discovered this Taoist theory could be applied in all areas of society and culture. For example, Chinese music developed from the application of Five Element theory. It uses a scale of five tones or vibrations. Each tone is related to one of Nature’s elements and therefore that element’s organ. This invisible connection makes five-toned Chinese music especially powerful for meditation, rebalancing organ function and healing. We can find many applications of Five Element theory in China, including landscape, architecture, martial arts, and the fine arts, to name a few. Emperors skillfully used this theory of relationships in politics to create kingdoms and consolidate power.

Over the ages, TCM practitioners have applied the Five Element Consciousness Framework to the treatment of hepatitis, arthritis, chicken pox, as well as women’s issues—including breast cancer, diagnosed in TCM medical literature as early as the thirteenth century. Any health problem you can name has been successfully treated by applying this framework. Today, TCM practitioners in China and in the West rely on the same wisdom others have used for millennia.

The Level of Energy

In the West, many schools of acupuncture and oriental medicine teach Five Element theory. Mostly, its explanation remains at a superficial level. Usually, the theory is covered in literal terms of what the eye sees and what the mind thinks it knows. Discussions revolve around the physical elements and the logic of relationships of “generation” and “control,” however, any relationship based on control can never reach the highest level of harmony. These discussions and study only provide a certain basic level of understanding. To grasp the real depth of Five Element theory and its extraordinary framework, you have to understand the properties and characteristics of energy; you have to recognize how organ relationships impact health, and you have to integrate an understanding of the fourth dimension.

Chinese practitioners have been successful with this framework for so long because it sorts the body’s relationships in a way that lets practitioners go beyond a symptom to identify its root cause. It gives them great creativity to restore the body’s integrated, multidimensional system to health. This wisdom also helped TCM establish a specialty in prevention. TCM practitioners understand external symptoms are warning signs of deeper dangers.

Five Element theory comes from Universal consciousness. It can be applied to everything inside Earth as well as outside. Even the Universe has to follow the law of energetic relationships. Whatever affects one planet will create changes in the others. Today, scientists estimate the Universe has more than 100 billion galaxies. Like the planets, galaxies share relationships with other galaxies. Earth and everything on it, including us, reacts to larger changes in the Universe—we may not be able to see them, but we cannot separate ourselves from them. As we move from subatomic to supergalactic worlds, we find astonishing examples of interrelated systems that function at the speed of light through relationships. Because of its universality, the Five Element Consciousness Framework can be applied anywhere, anytime to anything existing in this reality. 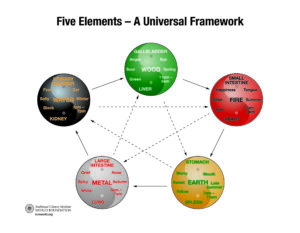 Excerpted from Digesting the Universe: A Revolutionary Framework for Healthy Metabolism Function

Read more about how the Five Elements correspond to one of the major organ systems in our bodies. Click Here.