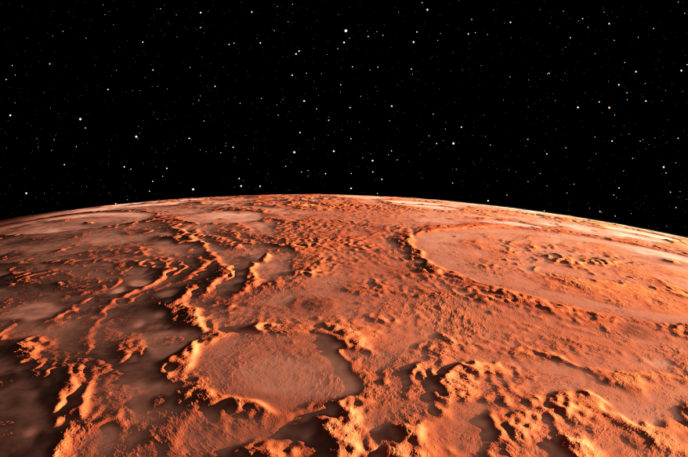 Mars, the fourth planet from the Sun, is better known as the Red Planet. Its reddish-colored surface, covered in dust and rock, is often the location of choice for sci-fi movies and comics alike. But although this tiny planet is Earth’s geographical “neighbor” and the two share many geologic and topographic features, Earth and Mars normally orbit with a distance of about 140 million miles between them.

For the past few months, the orbits of Mars and Earth have been inching closer and closer together. July 31, 2018 marks the date when Mars makes its closest approach to Earth since 2003. Fifteen years ago, only 34.6 million miles separated Earth from our Martian neighbor. That’s the closest these two planets have come in over 60,000 years. And although years to come (the nearest being 2020) will offer close-up views of our red neighbor, the 2003 record will not be broken until 2287.

On Tuesday, the planets will be a respectable 35.8 million miles apart, making Mars clearly visible with just the naked eye. The best viewing times are just before sunrise on July 31 for those in North America and at about 10 pm on July 30 for those in Hawaii. But although its brightly glowing orange light will be hard to miss, don’t worry if you do. You’ll be able to observe Mars in the night sky for for the next few months.

From the traditional Chinese medicine perspective, the human body is simply a microcosm of the larger Universe. All of the changes and transitions that happen within our Universal structure also happen within each one of us. As Mars approaches Earth and shines its glorious light on our planet, that light also recharges us from within.

You are a being of Nature. You are connected to the power and the energy of the swirling stars, the moving planets and the presence of all other beings sharing this planet with you. As you observe Mars on Tuesday morning, practice ‘The Dragon Stands Between Heaven and Earth’ to connect with this Universal Qi.

Guided Video: Click here for a video of ‘The Dragon Stands Between Heaven and Earth’.