Beaver Moon and Mercury Transit: What the Skies Have in Store 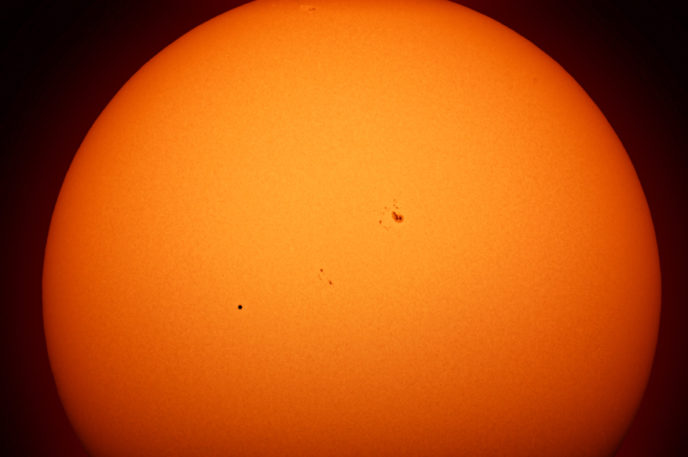 Today, for the first time since 2016, Mercury will pass between the Earth and the sun. A Mercury transit occurs only 13 times each century and won’t happen again until 2032.

At the time of this celestial event, Mercury will look like a tiny black dot in front of the massive ball of fiery gas that we Earthlings depend on for heat and light. The sun will appear 194 times larger than our smallest planet. The only way to view this event from Earth is through a solar telescope or through the Virtual Telescope Project’s website. Do not attempt to look at the sun through a traditional telescope or with the naked eye. People in many parts of North America will be able to witness this transit on Monday, November 11 from 7:36 am until 1:04 pm EST.

While a Mercury transit is a show within itself, the Universe has a lot more in store. On Tuesday, November 12, the Beaver Moon will light up the night sky. This full moon will be visible from Monday evening through early Wednesday morning. The “Beaver Moon” is the namesake of the nocturnal animals who are busy preparing for hibernation at this time of year. The November full moon is also known as the “Full Frost Moon”, after the frost that appears on the grass or the “Mourning Moon” if it is the last full moon before winter solstice. Lucky for us, we have one more full moon before the official shortest day of the year arrives.

Along with Universal change comes a shift in energy. As you witness Mercury transit the sun and you stand in the light of the full Moon, connect to the consciousness of this profound energy. Click the video below to practice The Dragon Stands Between Heaven and Earth with Grand Master Nan Lu. This standing meditation is central to our Dragon’s Way Qigong® program.