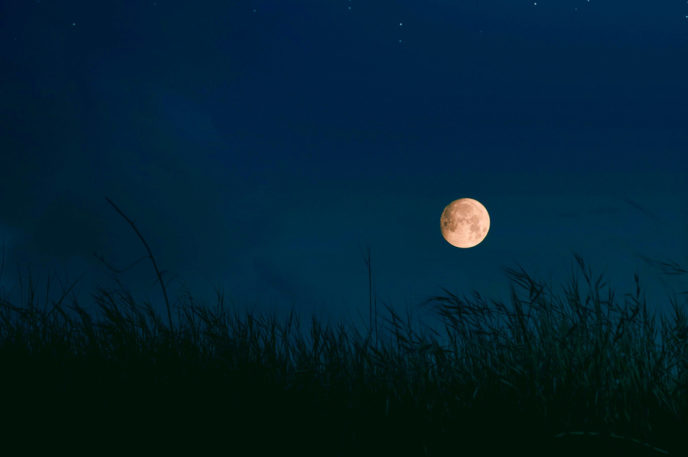 “When the night has come and the land is dark,
And the moon is the only light we’ll see.
No, I won’t be afraid, oh, I won’t be afraid
Just as long as you stand, stand by me.”
Stand By Me by Ben E. King is a timeless soul classic that celebrates its 60th anniversary in 2021. It has become an anthem of hope and love across the decades. Inspired by a spiritual song written by Sam Cooke and JW Alexander, there have since been over 400 recorded versions of the iconic song. As we approach the September’s Full Harvest Moon and the autumnal equinox, we can reflect on these lyrics of love, hope, balance, and harmony that resonate with the magnificent light of the full moon.

One Moon, Many Names

The Algonquin tribes, in what is now the northeastern U.S., gathered their staple crops of corn, pumpkins, squash, beans, and wild rice at this time. Therefore, they named this full golden moon the Corn Moon. Similarly, the Full Harvest Moon, a European reference, pays homage to the farmers who brought in their harvest under the light of the moon. Other European names for September’s full moon are the Fruit Moon, for the last ripening fruits, and the Barley Moon, for the harvesting and threshing of barley.

In many cultures, this month’s moon holds great significance. It falls close to the beginning of the 7-day Sukkoth holiday in the Hebrew calendar. This holiday ties back to the sheltering of the people of Israel during 40 years in the wilderness. Often to celebrate, a temporary hut, symbolic of a wilderness shelter, is built where the family will eat, sleep, and spend time. Sukkoth will start with sundown on Monday, Sept. 20, and end with sundown on Monday, Sept. 27, 2021.
This full moon also marks the beginning of Pitri Paksha (fortnight of the ancestors) during which Hindus pay homage to their ancestors, especially with food offerings. Pitri Paksha starts with the full moon in the lunar month of Bhadrapada, and ends with the new moon.
For some Buddhists in Bangladesh and Thailand, this full moon is Madhu Purnima, the Honey Full Moon Festival. It is tied to a legend that an elephant and a monkey fed Buddha fruit and honeycomb in the forest to bring peace between two factions.
In China, Vietnam, and some other Asian countries, this full moon corresponds with the Mid-Autumn Moon Harvest Festival, a traditional harvest festival. Ancient Chinese emperors revered the Harvest Moon as they believed it would bring them a plentiful harvest the following year. The tradition of eating mooncakes during the festival began in the Yuan Dynasty (1279–1368) in China. The baked treats are usually eaten after dinner while admiring the moon at its fullest and brightest. Because the festival is a time for families to get together, many legends are told during the celebration. One popular legend is about Chang’e, the Chinese Goddess of the moon who is believed to make magical mooncakes with her pet rabbit from her home in the moon.

This week is energetically dynamic. The Full Harvest Moon will reach its peak on Monday evening, September 20, 2021, at 7:55 p.m. EDT. Two days later, September 22, 2021, at 3:21 p.m EDT, we celebrate the autumnal equinox—the astronomical beginning of Fall and a powerful time of energetic balance.
In a world that seems more divided than ever, we have opportunities to connect to the light, to stand together in Oneness and to sing a song of hope and love—”Stand By Me. Stand By Me. Stand By Me.”

Join Grand Master Lu as he leads us in a guided meditation that taps into the transformative essence of the autumn equinox. Meditation will be held on September 22 at 7:00 PM EDT. Click here to receive a link to the meditation and a reminder email.
Interested in learning more about the Mid-Autumn Moon Harvest Festival? Read on!
Mind, Body, Spirit, Nature
full moon, Full Moon festival, harvest moon, moon, Nature, oneness