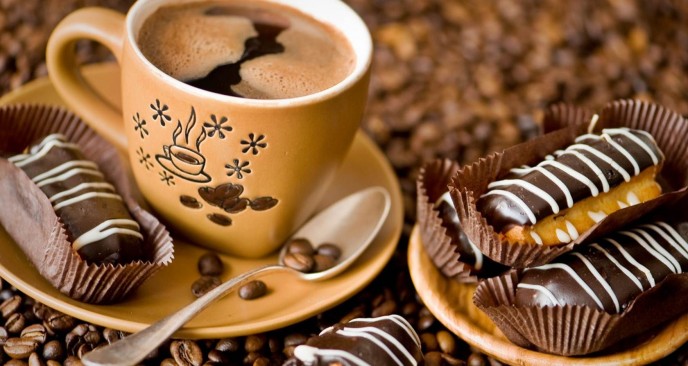 Chocolate-covered espresso bean lovers, brace yourselves for some good news! Two large-scale studies recently announced that moderate consumption of both coffee and chocolate may increase longevity and decrease risk of certain diseases, including cardiovascular disease. Even better, both decaffeinated and regular coffee were associated with these benefits; similarly, both dark and milk chocolate were associated with risk-lowering effects for cardiovascular health.

Conducted by researchers at the Harvard School of Public Health, the coffee study analyzed the data of several large decades-long investigations, concluding that those who drank 3-5 cups of coffee a day were significantly less likely to die from cardiovascular disease, as well as type 2 diabetes, suicide, and neurological diseases. In a separate, unrelated investigation, researchers from the University of Aberdeen Institute of Applied Health Sciences (UK) found that those who ate the most chocolate daily (roughly the equivalent of two and half 1.55 ounce Hershey’s bars) were 11% less likely to have a stroke or heart attack and were 25% less likely to die from cardiovascular disease. When they analyzed these results combined with the results of other similar large-scale studies, they found that the overall risk of heart disease was lowered by 25%, with a 45% lowered risk of cardiovascular-associated death.

What do these two foods have in common that benefit heart health? Interestingly, the answer may be related to a category of taste that they both share: bitter. Eastern nutrition traditionally categorizes the primary health benefits of different foods according to Five Element Theory, a millennium-old holistic framework that reveals how different aspects of our bodies and emotions relate to nature as well as to each other, a pattern of interrelationships that is useful for diagnostic and health purposes.

Each taste category, for instance, energetically stimulates the function of certain major organs in our body. We enjoy, even crave, certain tastes more than others because we need them—and those of us who particularly enjoy coffee or chocolate can’t live without them for a reason. Someone who loves that inimitably bitter taste is intuitively responding to a signal that his or her Heart is sending: it’s like an SOS from the Heart that its energy is out of balance and needs some help! Satisfying, rather than denying, that craving provides a much-needed energetic tune-up, which can, in the long run, prevent heart disease from developing. If we keep ignoring these body signals, small energetic imbalances become bigger and more serious, eventually manifesting physically over time as cardiovascular disease.

So the next time you can’t stop thinking about having an expertly crafted hot mocha latte (with a milk foam heart on top), listen to your body’s wisdom and go for it, while enjoying every last bittersweet drop! And don’t be shy about adding a packet of honey or raw sugar; the taste of sweetness helps your body relax and recover from the effects of stress, which many health experts believe to be one of the leading causes of heart disease (read a recent blog about stress and heart health here). The energetic vibration of sweetness helps your Stomach rally, which in turn calms down the Liver, the organ most affected by stress. Because the Liver is the “mother” of the Heart, according to Five Element Theory, anything that you can do to de-stress the mother will help its “child,” the Heart. Just be sure to remember that in time for Valentine’s Day—send your own mother a big box of chocolates, and perhaps you’ll experience the healing wisdom of Five Element Theory firsthand on many different levels!

Learn more about using food-as-medicine for prevention through one of our wellness programs, The Dragon’s Way—our next six-week session begins in March.