The Art of Using Chopsticks 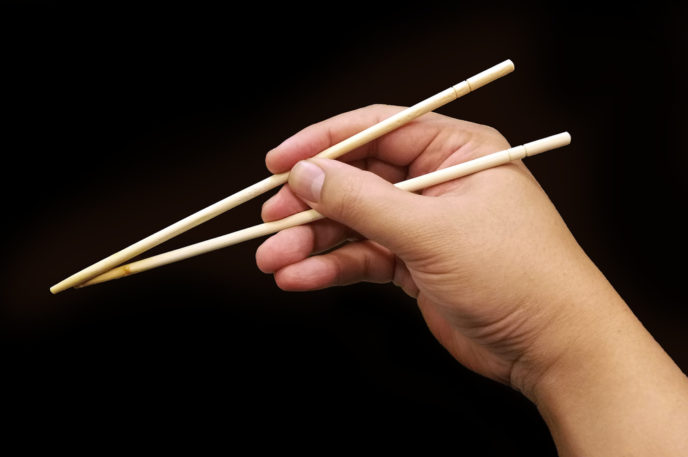 The meaning of food in Chinese culture as more than mere nourishment is evident from the moment you are seated at the table. Instead of a place setting of silverware, you will find a single pair of chopsticks.

Chopsticks are elegant extensions of the fingers. These tapered tongs can lift a grain of rice with delicacy and deposit it gracefully on the tongue. The very experience of using chopsticks puts the diner in an Eastern frame of mind. Food is selected, balanced and savored, one piece at a time. Chopsticks convey the food softly, adding no metallic taste or sharp sensation of their own.

Chopsticks themselves represent the principles of TCM’s Yin and Yang Theory. One stays still while the other is in motion. When used and held properly, chopsticks simulate the digestive system further by exercising and massaging the first index finger, which is where the Large Intestine energy meridian begins.

Anthropologists believe that chopsticks may have originated 5,000 years ago as branches broken from a tree or pieces of bamboo joined together like tweezers. These ancient culinary tools were used to stir and select small morsels of food from big simmering pots. In China, chopsticks are called kuai-zi, which roughly translates as “agile” or “quick little fellows”. Chinese chopsticks are usually nine to ten inches long and rounded at the end, while Japanese chopsticks are shorter and usually pointed. Most often they are simple devices made of wood, but can be elaborately inlaid or jewel-encrusted items made of ivory, silver or jade. The simpler versions are used for cooking as well as eating.

Dining with chopsticks has a certain etiquette. For example, a small quantity of food taken from the serving dish is placed in a rice bowl, which is held close to the chin. The chopsticks make small scooping motions to lift the food into the mouth. When serving yourself, it isn’t polite to search around in the serving dish with your chopsticks, or replace a piece of food once you have taken it. When you are finished eating, the chopsticks should be placed parallel across your rice bowl, not crossed over each other, which is thought to invite bad luck.

Learning the etiquette of Chinese dining may be simpler than learning to use chopsticks. Here are a few instructions to help you do it properly.