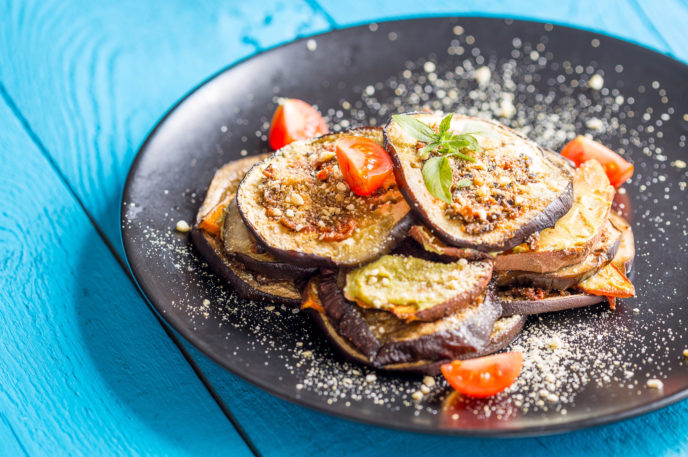 Eggplant first made its debut in ancient India over 1500 years ago, where it continues to grow wild. This unusually-shaped fruit (Botanically, it’s actually a berry!) then traveled around Asia, to Europe and North America. In 1806, Thomas Jefferson introduced eggplant to the United States. Not knowing what to do with it, people used it as a table centerpiece until the early 1900s.

Eggplant has been produced in China since the 5th Century BC, when aristocratic women would use a black dye made from its skins to stain their teeth. The history of this berry brings with it many stories and superstitions. For example, Chinese brides were required to have 12 eggplant recipes prior to their wedding day. And when eggplant was first introduced, Italians believed the “mad apple” caused hallucinations.

A member of the nightshade family, eggplant is related to tomatoes, peppers and potatoes. Originally resembling goose eggs, these small white or yellow fruits are now available in many varietals. Extremely versatile, eggplant can be baked, broiled, steamed, fried or cooked and pureed. It can be used as a meat substitute for a hearty meal or as a delicious dip with bread or crackers.

Chock full of vitamins, antioxidants and fiber and low in fat and carbohydrates, eggplant is known as a nutrient-dense food. It is also shown to reduce the risk of heart disease, help control blood sugar and eliminate free radicals in the body.

When we look at eggplant from the Eastern perspective, we see more than its delicious taste, high nutrient content and versatility. Traditional Chinese medicine views food as a pathway to healing. When you put food into your body, you’re eating much more than the actual food. You’re getting the energy essence of the food—where it was grown, how it was grown and the messages it contains. Food is one method that practitioners use to prevent illness or bring the body back into balance. Achieving balance is a key component to wellness.

Eggplant is is composed of about 95% water, making it a weight-loss wonder. Eggplant has the remarkable ability to balance and cleanse internal Qi while improving Liver function. Its cooling essence helps to remove heat trapped in the body, namely the digestive system, helping it to flow smoothly. While eggplant is available year-round, Spring and Summer are the best seasons to enjoy it. Traditionally, eggplant is eaten in Summer in China to combat the high temperatures and reduce heat in the body. Eating in harmony with Nature helps our bodies to remain balanced.

Visit our recipe section to try some new eggplant recipes!

Then check out our Dragon’s Way Qigong® program, which incorporates Qigong movements, an eating-for-healing plan and lifestyle guidance to bring the body back into harmony.