February’s Full Snow Moon: The Power of the Invisible 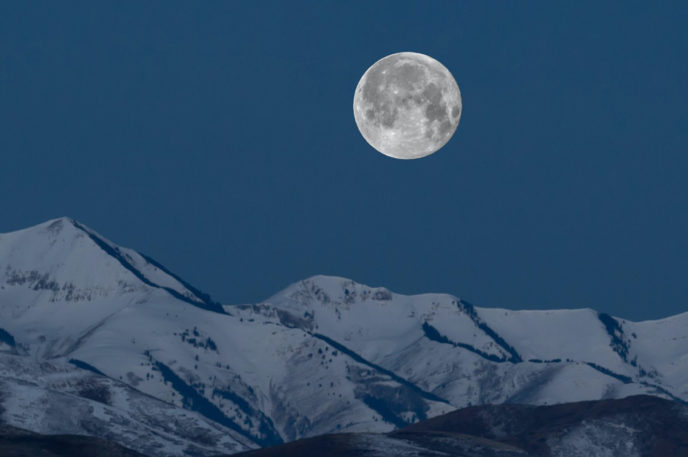 Every full moon has a certain significance and silent power. February brings us the full Snow Moon. The name comes from several places, having roots in Native American, early American and European sources. Traditionally, each full moon’s name extends beyond the event itself, to encompass the entire lunar month. The name of February’s full Snow Moon is fairly straightforward. Typically, the heaviest month for snowfall in the North American region is February. With this year’s seasonal snowfall at an all-time high, the Snow Moon is living up to its namesake.

Other names for February’s full moon have been connected to animals—Eagle Moon (Cree), Racoon Moon (Dakota), Groundhog Moon (Algonquin) and Bear Moon (Ojibwe). Throughout history, the human desire to name natural events after animals, weather, temperatures, colors and seasons shows the ancient awareness of Nature’s flow and its connection to all things, visible and invisible. The full moon deeply connects us to Nature and its purpose. In Chinese culture, the full Snow Moon is the first full moon of the new year, and brings its own unique consciousness.

Sun and Moon: Visible and Invisible

The moon represents the entire invisible world; the sun represents the visible world. Living things rely on both the sun and the moon. But while the sun needs to show itself every day, the full moon is invisible for all but one day each month. It balances an entire month of energy in just one beautiful showing.

In the full moon we see yin and yang, day and night, invisible and visible. Along with the sun, the moon has the power to control the rising and falling of the ocean tides. Seventy percent of our Earth—and coincidentally, our bodies—are made up of water. You are a being of Nature, connected to the moon’s miraculous power and energy. Every time you face a challenge, allow the moon’s invisible yet powerful essence to rejuvenate you. Allow it to be a source of cleansing, a reset button of sorts, a clean slate. Let go of all cares, begin with a fresh palette to inspire creative energy as the full Snow Moon shines brightly upon you.

The next full moon will grace the skies, Saturday, February 27th at 3:19am EST. Embrace the power of the full Snow Moon, this new beginning, and all its possibilities. Enjoy holding The Dragon Stands Between Heaven and Earth for a few moments during this time and each day this week.

Join Grand Master Lu for a live meditation on YouTube Live: Saturday, February 27 at 9:00am.